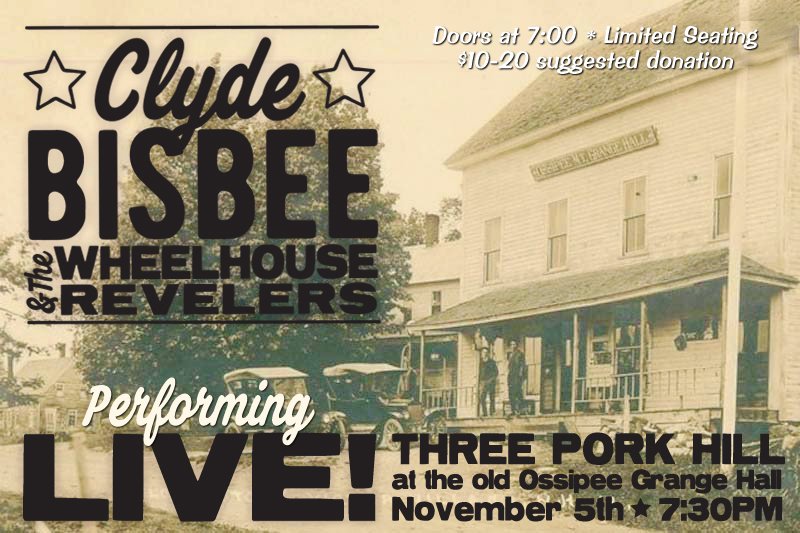 Hey Folks! Just wanted to mention our upcoming show in Ossipee, NH, November 5th, 2017! This appearance, our very first show, by the way, will take place at Three Pork Hill Rd. in Ossipee (Google map), the former Ossipee Mountain Grange Hall. The old Grange Hall has retained much of its character from its younger years, in fact, here is some of its great history from the non-profit GALA Community that also calls the former Grange home:

“George O’ Bean built the three-story building on #3 Pork Hill Road in 1904 while living in the neighboring house at the corner of Pork Hill and Water Village Rd. Bean used balloon frame construction, an architecture characteristic of the early 20th century designed to accommodate free movement of large social gatherings. This design also gifted the second-floor venue with stunning acoustics.
The first-floor began as general store where locals could buy eggs, a newspaper, milk, and other staples. Elloise Bean, George’s daughter, managed the store during the 1930’s while living in a small

nook on the side of the building. Meanwhile, the second two floors were owned and operated separately by the Ossipee Mt. Grange Association No. 131, a local chapter of the National Grange of the Patrons of Husbandry. The Grange hosted lectures on rural living and agriculture, community suppers, and social gatherings like dances and concerts.
The Grange was described in an August 19th, 1932 article from the Granite State News titled,Water Village in Days of Yore: Self-Sufficient, Self-Reliant, Self-Dependent Manufacturing Community. The article reported, “dances were held there; the old Wolfeboro Band gave concerts there; Indian medicine shows were held there.” The article continues by illustrating what mid 19th century Water Village looked like with three working mills including a Fulling Mill, Grist Mill, and Saw Mill, as well as the Grange Hall, a Free-Baptist Church, a schoolhouse, a blacksmith, a tannery, and a few general stores.”

We can’t think of a more appropriate place to put on our first-ever show! We are all about history, of course, and to think that we very well may be performing songs that were performed at the Mountain Grange when it was swingin’ and rockin’ back in the 30’s & 40’s….well, that’s just peachy keen! You can read more about the history of the Olde Ossipee Mountain Grange at the GALA Website.

Shows at Three Pork Hill are technically, private house concerts, so things are a bit laid back. Sometimes there are snacks, sometimes not…sometimes drinks, etc., etc. So, you might want to consider bringing your own refreshments. We’re also encouraging folks to dress up in whatever vintage or vintage-inspired threads you can string together. Makes us feel right at home and gets everyone right into the spirit of a Clyde Bisbee & The Wheelhouse Revelers show. Here’s a Pinterest style board our friends at Birch Blaze Studios have put together, for your inspiration. Here’s another…

The show starts at 7:30PM, doors open at 7PM. There will be a suggested $10-20 donation at the door. The donations help to defray our expenses as a group as well as, and more importantly, helping to allow the stewards of the old Grange, ahem, Three Pork Hill, to continue presenting live music and great community-enriching events. We hope to see you there!

Hello There and Thanks For Swinging By! 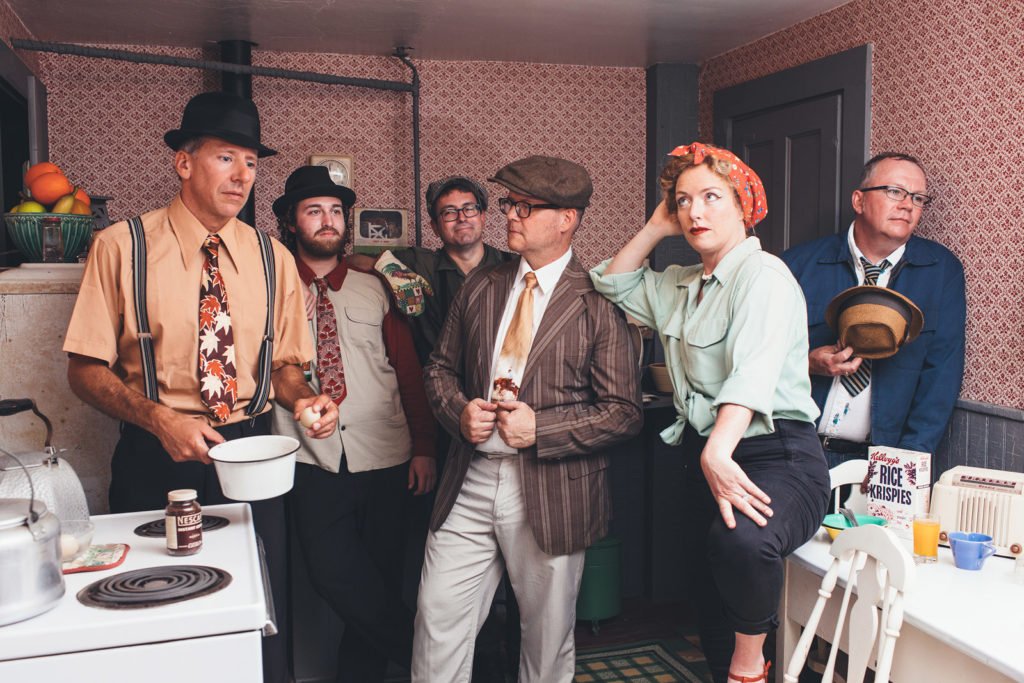 Welcome! Welcome, welcome to our little corner of cyberspace! You have just stumbled upon, or maybe even heard about it and came here on purpose, the Web haven of Clyde Bisbee & The Wheelhouse Revelers. Either way, we’re so glad you did! As of this very first blog post we’re a relatively new band on the scene. We won’t go into introductions and all the nitty gritties, the rest of the Website does a pretty good job of that. This blog will serve as our news and happenings page.
So, we’re currently in “soft launch” with this Site. Things are rolling but we have a couple more key ingredients to add; some audio recordings, of course, they’re in the works. And a couple of videos which we are planning to begin pre-production for. Please follow us on Facebook and Instagram (@clyde.bisbee) if you’d care to keep an eye on what we’re up to and come to a show or two, or six. No newsletter situation right now, so those two social media outlets along with this Website are the best ways to keep tabs.
So that should do it for our first blog post. Please take a look around the Site and even drop us a line, we’d love to hear from you! Oh, and if you have any hot leads on hip festivals and cool venues we belong at, hook a brother up!